Song of the Day #71 Los Saicos

Peruvian Proto-Punk Rock from '65 & '66. What's not to like! The stuff the true record geek goes straight for. I saw the album this comes from at Steel Wheels (the record store at the corner of my street) The cover alone was almost enough for me. Went home and listened to a couple of minutes and was back for the purchase. Had a conversation with the guy at the counter where he said this was how The Beatles should have sounded. Love those conversations with record counter guys. OK, I realise I've become a Nick Hornby character.
This album comes with a full comprehensive booklet on Los Saicos's career. They do the surf stuff. They do the melodic Beatles stuff. They do the graveyard shift. Sometimes the ercord gets slightly samey but it's a compilation of singles and b sides. They never made an album. One or two tracks at a time and it can't be beaten. At points, ((Fugitivo De) Alcatraz) they all start howling like dogs. Their name translates as The Mosaics on Google translate but I never have trusted that programme and it's probably something to do with psychos. Apparently they hadn't heard the American Garage Bands of the same period but came up with this sound (which is so evocative of it) just from listening to the British Invasion stuff. They are just made for record geeks and completists. 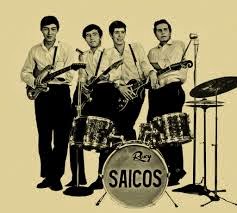 'Not even in their craziest dreams did Los Saicos imagine that for writing songs about madness, destruction, the undead and runaway criminals, they would be awarded with a marble plaque with their names and portraits at one of the street corners where they used to kill time doing nothing.' Demolicion album booklet
Posted by Brush Box at 2:57 AM