Goat are one of several bands on this list plundering music from elsewhere for all they're good for. They hail from a small town in Sweden and have conjured a mystique around themselves that has served them well critically and commercially.

They're obviously anything but authentic. But 'authenticity' is a slippy and difficult concept in 2016. Their third album Requiem is a variable record. They overdose on pan-flutes for the first few tracks before things begin to kick in. Then they do the Afrobeat/ Soweto jig to excellent effect and weave it in with psychedelic sounds from the age quite deftly. Whether this is exploitative cultural appropriation is not an argument I'll get into. There's plenty to enjoy here. Oh, and it was also the most played album in independent record shops that I went into this year. For a while this autumn it was following me round wherever I went. 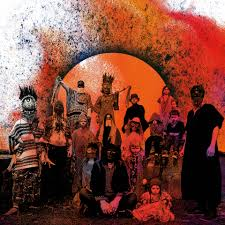