Lazy Saturday morning listening to the wonderful Turtle Soup last album by The Turtles. I was introduced to this record by a recommendation from the late, great music critic Tom Hibbert in The Perfect Collection for which I had a long running series on here a couple of years back. So here's a picture of the record by my record player just now and the review I wrote about it a while back... 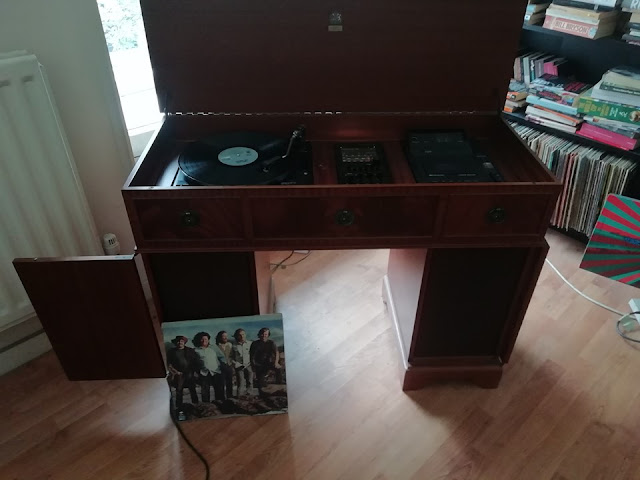 The Turtles' 1969 album Turtle Soup is a fascinating period piece as well as being a very fine record to boot. Though the chances are you haven't heard of it. I hadn't until yesterday, but now I've found it and it feels like chancing upon buried treasure. That's only slight overstatement! The band's last studio LP, produced by The Kinks Ray Davies, the first time he had taken the helm for any but his own records. It was also the first time the group had put out a record solely restricted to songs they'd written themselves. As a swansong, it's a remarkably happy one.

I'm not sure how The Turtles are perceived, if at all in the UK nowadays. They're certainly not much revered. I suppose they're probably best remembered for their 1967 smash, Happy Together, a marvelous record of course, but by no means the only thing of note they recorded. Critically lauded by pop connoisseurs like Tom Hibbert and Bob Stanley who don't follow the standard critical path in terms of their tastes and obsessions, listening to the band's back catalogue offers an almost hidden history, an alternative route to appreciating American music of the late sixties away from the beaten track of the established canon of album bands, The Byrds, The Doors, Love  and The Velvet Underground.Where it's all about Pop rather than Rock, and taking yourself too seriously is viewed as something of a crime.

The Turtles were incredibly prolific between their peak years 1965 and 1968, most specifically in terms of singles, achieving nine American Top 40 hits in all over this period. By 1969 their commercial star was beginning to wane, perhaps as their consistently jovial, poppy approach began to be seen as out of step with the mood of the times as the world turned increasingly serious. Turtle Soup was a conscious attempt to address this and make an album statement, bringing in Davies to provide a ministering guide at the wheel, inspired as the band had been by 1968's The Kinks Are The Village Green Preservation Society.

Turtle Soup is by no means as coherent as that record which qualifies pretty well as a unified concept album and is among the very best records released in the era. By contrast, this is a diverse collection of sun-drenched, lovingly constructed pop songs, some slightly better than others, but all worthy of inclusion and the experience of listening to it is like spending some time browsing at a Pick and Mix sweet counter assembling a cone.

Davies' thoughtful touch at the mixing desk appears to work dividends as it's a quite beautiful record to listen to. Each instrument and vocal bobs and weaves in the mix throughout.  No one song sounds quite the same as the next. A truly democratic, team effort. The Turtles came closer to The Beach Boys vision of harmonised joy than perhaps any other American band in terms of their layered vocals and there are also passages of brief instrumental beauty in their songs where the band suddenly come across almost as a chamber quartet.

But they don't dwell in these moments. They know that their job is ultimately to be a pop band and understand fully that this is no sleight. Indeed, it's a compliment. You Don't Have to Walk in the Rain,for example, the album's final track is the most joyous way imaginable to bring down the curtain on a successful pop career. While so many of their peers were embarked on the road to apparent profundity and drug fueled excess at this point in time and put out shambling, incoherent and self-indulgent records as a consequence, Turtle Soup  is a model of pop concision, maintaining a remarkable amount of the innocent blast of the band's early singles. It certainly doesn't sound like a record made in 1969. To its cost, ultimately. It obviously didn't at the time either, reaching a meagre
# 115 in the American Billboard chart. A travesty, but ultimately what does this matter? Almost fifty years on, the quality of the album speaks for itself. 2016, meanwhile will surely find me ordering a vinyl copy of this at some point, for my own collection. And it will get played. A lot!