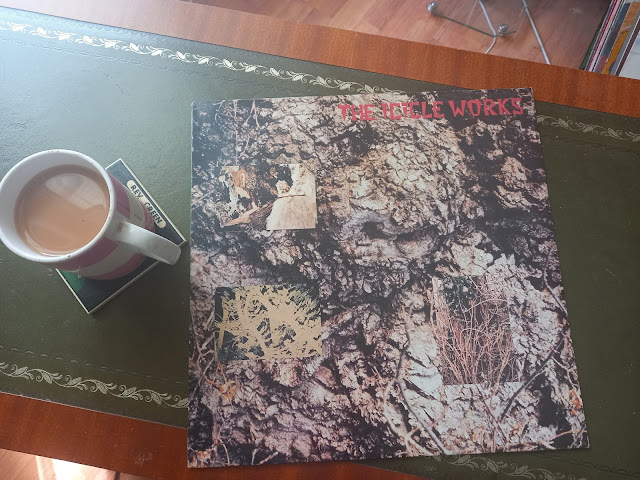 We were all seventeen once. It's best not to forget this fact. When I was seventeen, I had Aztec Camera's High Land, Hard Rain so I was happy. But I was hungry too, making my way towards R.E.M., The Smiths, The Go-Betweens, The Triffids and Lloyd Cole & Commotion, university and what lay beyond.

Mostly I was drawn to, frankly literate white, guitar bands I confess, but that's what made most sense to me at the time and I don't have the slightest regrets about any of the records I bought around that point in time. Well The Fixx's Shuttered Room was perhaps a bit of a duffer but I don't have that anymore strangely.I think it left because it knew that it didn't really belong with the tecords around it in my collection.

In the wake of these fabulous, life changing records, came some lesser ones including the debut album by Liverpool band The Icicle Works. Coming in the wake of The Teardrop Explodes and Echo & the Bunnymen, it's clearly heavily indebted, in fact could not exist without them.

It's no Crocodiles or Wilder. It feels like a younger brother in many respects. It has the kind of lyrics that I might have attempted in those days, fully flushed with the joy of coming of age. Falling in love for the first time, making fudamental life-changing discoverues in music, film and literature. Not fully formed yet. In the process of becoming.

I enjoyed it thoroughly, more than I had expected to, listening to it yesterday. It's highly anthemic, in fact it's composed of little else but anthems. But not in the naff way that The Alarm were anthemic at the same point in time. Arms aloft, fists, clenched, trying to be The Clash. The Icicle Works want to be themselves, despite the evident influence of the two bands mentioned and the fact that they sound very very Liverpudlian.

They have all the power, the dynamics of a great three piece band. They capture a moment in life really well. A passage in time. They're brash and ridiculously florid at points but overall enthusism wins the day.