Late testerday evening as the light outside my window, alnost three months into Lockdown, was just beginning to fade, I picked up a tip from the ever reliable A Pessimist is Never Disappointed blog, listed to the right hand side of this page, and started listening to the new Drab City album, Good Spngs For Bad People. It was a fine closing soundtrack to a quiet, lazy day, encouraging me to listen to it again this morning and write this.
Drab City are a duo working within an established tradition. It would be difficult to listen through to this record without the comparison points of Portishead and Broadcast popping into and staying in your head. The album has similar, Sixties soundtrack inspired woozy charms. In fact it's drenched in them.
But in this case the shadow of influence is a recommendation rather than a curse because Drab City take these clear inspirations as  a starting point to forge off onto a journey that over the course of the record they both make one of their own despite remaining an act of hommage.Unusual balancing act, but they pull it off.
This is a walk home across deserted city streets by lamplight with The Ipcress Files spinning in your head. Because John Barry is every bit as much a mentor to Drab City as Portishead or Broadcast. I'd throw early Goldfrapp into the mix too. By now I suspect you may be getting a fairly accurate picture of what this record sounds like, but please don't let that put you off listening to it for yourself. These after all are pretty impeccable references. Anyhow you wouldn't not watch a Brian De Palma film, just because you knew that he was influenced by Hitchcock.
Even though it's blindly apparent where this is coming from, it doesn't make the record itself any less of a luxuriant listen. Throughout our lives we watch the same kind of films again and again, whether they be Thrillers or Coming of Age flicks, and the fact that we know innately where they are going as well as where they come from doesn't make the journey to the end destination any less enjoyable.
Drab City have a couple of safe pairs of hands at the helm and they manage the journey with cool restraint, never once taking their hands off the wheel or their eyes off the bending track ahead. This is deeply, deeply filmic stuff, and although you never forget that essentially this is fiction, you nevertheless can't take your eyes off the screen for the duration. It's also one you might want to go back to and enjoy all over again, from the beginning. I certainly will. 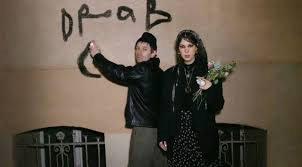