On a day of quite outstanding new album releases this, Full Hand, the second album from Kevin Krauter, stood out from the pack for me. It's a devastating, remarkable statement, identifiably slotting into a recognisable generic category while demanding attention for itself at one and the same time.
Krauter was, and possibly still is  a member of Bloomington, Indiana's Hoops one of the more interesting Indie bands to emerge in recent years. But good as Hoops are, this is something else still. Full Hand marks him out as one of America's lonely boys, in a noble tradition going back five or more decades; Gram Parsons, Chris Bell, Alex Chilton, Kurt Cobain, Elliott Smith, Beck, Jeff Mangum, Mark Linkous, Christopher Owens, Mike Hadreas. The lonely boy in the High School corridor. The one that others shy away from or bully who is all the while is plotting his quiet revenge and escape into music .
Perhaps there's a reason Krauter  became that kid as he was homeschooled until his high school years . Raised as one of six siblings in a heavily Christian household, where he was not allowed to listen to secular music. This surely feeds into the otherworldly sensibility that haunts Full Hand, the essential loneliness but inextricable sense of mission that strikes the listener again and again on listening through to the record.
When asked to name favourite artists and inspirations in interview Krauter generally mentions a number of unorthodox sources that perhaps hint at what's going on here. African, Japanese and Brazilian music that feed into the offbeat tonalities and rhythms on show a different way of going about things and subsequently a different sound resulting though I would maintain that it still fits recognisably into the American tradition I outlined above.
Not all of Full Hand works for me, some of the tracks on the first side of the record congeal rather into Emo self-pity . But it hits its stride in a glorious, almost sublime run of songs stretching across Side Two when the awestruck wonder of proceeddings is astonishingly impressive, marking this out as the best record of its sort I've heard since Perfumed Genius's No Shape or before that Girls' Father, Son, Holy, Ghost.
You can only hope that Full Circle finds the ears it deserves, and many of them at that, because this is a really special record. It describes a certain sense of isolated loss but also the transcendent beauty that can come be constructed through it when it's experienced in the difficult teenage years. Krauter is a special talent. I wish him well in his search for his audience. This is an album which exists in the margins but demands to be heard, and now rather than at some point further on down the line. It captures and restates the loneliness of Elliott Smith in particular without being obviously derivative and that's almost as high a compliment as I can give. 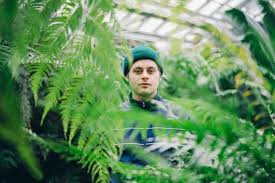