Funny and angry young British band record of the year:

Now this is a find. Yet another angry and acerbic young London band, The Cool Greenhouse who perfectly capture the insane, hyper-surreal tenor of the times with their eponymous debut album, just out.

Taking their lead most obviously from The Fall, The Cool Greenhouse spin a thick, dense psychotic web of sound for lead singer Tom to lay out his manifesto upon. This is well described by second track Cardboard Man, where former Prime Minister David Cameron is skewered in the most delightful and exhilarating manner.

This may be a difficult album to get through at a single sitting. Things are turned up to the max from the off and the pace rarely lags thereafter. It's all quality stuff mind . Lyrics that take the temperature of our bizzare, frenzied times, itemising the mundane and paranoid concerns of modern living. Blur tried to do a similar thing almost thirty years ago. Frankly this band do it with greater accuracy and honesty.Though maybe not with the same commercial potential. But they don't seem remotely concerned about all that nonsense.
I'm not sure where The Cool Greenhouse stand currently in the scheme of things in terms of their public profile. I only came upon them a couple of days ago and quite by chance. Their prospects should be good anyhow. Certainly Idles, Sleaford Mods, Shame and Goat Girl in particular have ably demonstrated that this stuff has sufficient cultural cachet at the minute to catapault bands like this, who are not prepared to accept what's on their plate, onto the pages of Q and larger venues. Hope The Cool Greenhouse follow a similar path. They certainly deserve to do so on the merits of this.
Having already astonished with Cardboard Man they continue to exceed expectations with Dirty Glasses which is pretty much their How I Wrote The Elastic Man. Kurt Vonnegut, Mark E. Smith Thomas Pynchon and Charlie Kaufman swop anecdotes and perspectives over unwise cocktails in a smoky bar, (the sort that no longer exist), one of them telling a tale of going round to dinner with Margaret Thatcher and being shocked by the state of the glasses in the cupboards in her kitchen.
But they don't just project the guilt outwards at obvious, guilty parties. After all, in their own words,  'We represent a different platform. Dispossessed pinko middle classes.  Who have very dirty glasses. And anyone else who has very dirty glasses. You see, the purpose of this band,is to offer a glasses cleaning service. At a very reasonable price.' We're all complicit in this of course but at least here's a band who are trying to do something about it.
So while The Cool Greenhouse don't have all the answers, (why on earth would you want to trust any band that claimed that they did), they ask the most interesting questions and do so while having the best of possible times. 'There may be trouble ahead.' As the captain of The Titanic may or may not have said, 'But while there's moonlight and music and love and romance. Let's face the music and dance.' This is as good a soundtrack as any for that right now. Just don't try to dance all the way through it is my advice. You're liable to give yourself a hernia. 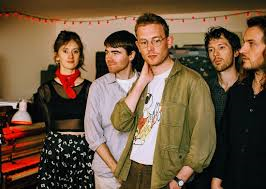