This is not necessarily a rundown of my favourite songs from 1982, though much of it is. Anyhow, Haircut 100 are not exactly a great enough bete noir of mine to make me grimace and snarl. They were OK I suppose. Hardly the antichrist.
They certainly need to be here if you want to tell the story of 1982. It was their year as much as anyone else's. They encapsulate so many aspects of the year. That White Funk thing realised so beautifully on Favourite Shirts. An idea of Indie, eveen though they were on a major label. The thought that getting on Top of the Pops and Smash Hits was much more important than being liked by the NME. A slight hint of that Thatcherite thing, that consumate aspiration that became more immediately recognisable in the charts, especially over the next couple of years.
Anyhow, Haircut 100 were certainly more innocent than that though they also seemed pretty pre-thought and packaged, not to say vaguely opportunistic. Those matching outfits, sweaters, shorts and moccasins that might have been construed as much as Hitler Youth as Enid Blyton's Famous Five if you wanted to be unkind and ultra-cynical.
Pelican West, the debut album, which tells their whole story really, is difficult to sit through as a whole, certainly much more so than Dare, Lexicon of Love, Sulk, New Gold Dream, Tin Drum, Too Rye Aye or any of the other great LP document of those years. It belongs more with Rio and True really. It feels like you're attending a children's party, all jellybeans, tizer and cream cakes, when you've just turned seventeen. But there are still some really excellent pops songs on there so I'd advise a listen or re-listen.
Nick Heywood, and Nicy Heywood was the talent in the band, said, (in Smash Hits I think), that one of his main aims was to get words like triangles and toblerone into his songs. Fair enough. Haircut 100, as well as anybody remind me of what it felt like to be young in 1982. Volkswagens, bicycles, innocence, first crushes and first loves, optimism. In many ways they were taking a similar trip to bands that I much preferred at the time; Orange Juice, Aztec Camera and even The Smiths. Though I'm sure that all three would have very much blanched at the comparison.
Orange Juice are a particularly apt reference point. The Haircuts seem to me to have taken a very good look at what Orange Juice did and what made them so fresh and exciting, tailor and sanitise it and put it squarely in the charts where Orange Juice never managed to put it, with the shining exception of Rip It Up.
Haircut 100 didn't last very long. The bunch of them decided that they didn't like Nick and chucked him out of the band that only he had really made a viable concern in the first place. Without him they were essentially Modern Romance and immediately sunk like a stone. Still, Facebook brought them back together and they reunited and played together again decades later. You make these mistakes when you're young. 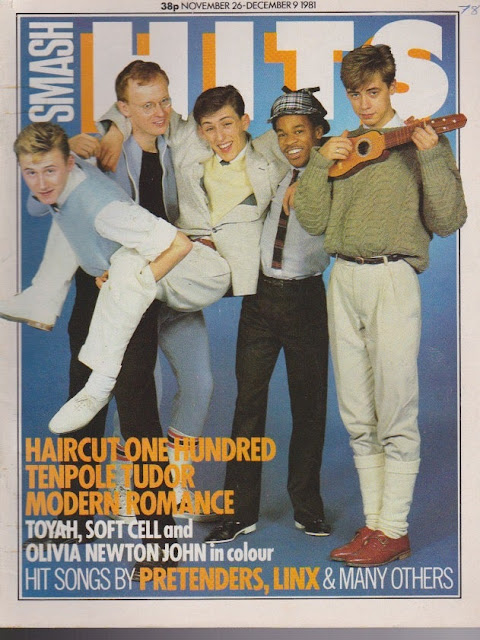