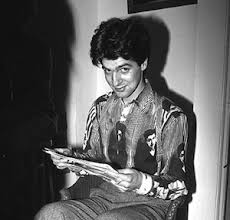 I probably own more books by Jon Savage than any other 'music critic' and they're all about much more than just music as all good criticism of this sort should be. He's the best example I can think of, of someone started off their career writing for fanzines and the music weeklies and then went on to take it somewhere much broader but still never lost touch with his first loves and obsessions.

Savage was born in Paddington and read Classics at Magdalene College Cambridge so hardly came from the rough side of the tracks, as if that matters at all. After graduating, he zeroed in on Punk early, interviewed all of the main players as a fanzine writer and then for Sounds, probably the least hip of the three weekly UK weekly papers, but one that clearly gave him a good grounding for what came next.

Famously beaten up by Jean-Jacques Burnel in a pub called The Red Cow for giving the second Stranglers album No More Heroes a bad review that it probably deserved. He moved from Sounds to the Melody Maker, and then onto The Face and bigger things. In the meantime, he had also spent some time in Manchester, recognising early the importance of Joy Division and what was going on there.

Probably made his big splash in 1991, with the publication of England's Dreaming, I'd say still the most important and best documentation of British Punk. Since then he's continued to be an essential writer. I could recommend any number of books by him. He has an academic's level of scrutiny but has retained the beating heart of a fan.

In In Their Own Write, Tony Parsons, (who will not be included in this series because I think, first and foremost, he 's not a good writer), wrote the folllowing:'I was looking at the NME the other day and some of them are still there. I think it's sad seeing names there now who there in 1982. That's a shame because Julie and I showed you can take it anywhere - a column in The Daily Mail, write book, on television.'

But are they good books Tony? And is writing a column for The Daily Mail really so much better than and so much of an advance to hanging out with and writing about The Clash? Savage and what he's done, is probably the best response to Parsons comment. I wonder what he thinks of him  Possibly not very much.