In 1985 my younger sister had this NME article posted on her bedroom door. 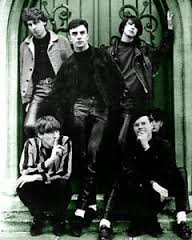 Primal Scream in 1985. Wishing they were Love.

Time's Up! NEIL TAYLOR puts his typewriter where his gripes are and pleads on behalf of new, young pink-rock style groups (like PRIMAL SCREAM and THE BODINES) as they rebel in the face of trad-rock invasion from America. Supposrting shots; LAWRENCE WATSON. [This was part a joint article about The Bodines and Primal Scream, which is why they are talking about The Bodines]

If something doesn't happen soon, next year will see the demise not of independant music (that was last year's funeral) but of the music business itself: the monster will devour it's mentors in the form of falling sales and old, sagging journalists keeping under the stench of their own rotting taste.

As The Bodines depart for their live perfomance, it's not difficult to think that it amounts to nothing. All there is going to be after this is anger.

"To me it's just the total fucking erosion of British culture by America crap!"

Bobby Gillespie, lead singer with Primal Scream, leans back in his seat to deliver the final blow to trans-Atlantic tat: it's familiar table talk again.

"I just think that new bands in this country are choked even before they're born. There's a lot of new, really good pop groups in Britian who are totally fucking ignored as a result of American rock and inverted fucking racism on the part of journalists..."


What has undoubtably been the finest (later) Creation release release - Primal Scream's 'All Fall Down'/'It Happens' - has been privately applauded by the press butup until now no-one has had the initiative to put their pen where their penchant is.

These Glaswegians - Bobby on vocal, James and Paul on gutars, Robert on bass, Martin on percussion, and Tom on drums - formed last June, and they have since developed into one of the most potentially brilliant new bands. Building a sound upon delicate percussion, a probing bass, and meticulous melodies, they have developed through the obvious (though useless for attracting major attention) medium of the live concert. And every outing, Bobby Gillespies' voice has strengthened, whether delivering love songs like the slow, gently rising 'Leave" or more pungent flowing songs, like the outstanding 'It Happens'.

"We've only played a small number of concerts," comment Bobby, "But that's deliberate. We never want the attitude that so many bands have, the sort of 'let's go and play any old dive' outlook, bands that start out as pub-rock bands are pub-rock bands for the rest of their lives, no matter how successful they are".

"Instead, we've been organising gigs to help our friends. We hire a room every two weeks and put bands on. The first band we put on was The Loft, and they where followed by Big Flame. We'll be the third band, and then we'll get The Pastels, then mabe The Shop Assistant, and then...who knows?"

From A Whimper To A Scream

As Bobby Gillespie see it, two things are important for the development of Primal Scream, Firstly, the group - like all new groups deserves more radio coverage, or rather easier access to it, than they are getting. Secondly, they feel that the press should give them (and others) the access to the sort of audience that their single won't reach if it is marketed along the lines of a 'normal' indie singel. And overriding both of these problems is the inescapable link between Bobby Gillespie, drummer with The Jesus and Mary Chain, and Bobby Gillespie, singer with Primal Scream.

"I don't want peope to think 'oh that's the guy from The Jesus and Mary Chain, better check the single out', because that's just shit, it's secondhand," claims Bobby.

"I want people to appreciate us for what we are and not who our friends are. Remember, I was in this group before I joined the Mary Chain, and the only reason I joined them was because they needed a dummer and I could keep time. I can't fucking drum!"

"This groups shoud make it on it's own merits but it's so difficult getting radio play - too many DJs just sling indie records in the bin. It's not that I think we should be given hours of radio play a day, it's just that we should have access to compete on equal terms with those records that so seemingly get automatic airplay. Our songs are melodic, they're accessible - all we're asking for is a chance".


The chance Bobby Gillespie wants is the chance to prove that Primal Scream are a classic band, lifting the good points of past 'classic' bands (Love, Velvet Underground) and delivering them up into a new era.

Live, their songs glide on waves of harmony and rhythm - bobbing though sounds like 'Careless' with its flowing melody and pumping bass - and ignore the total contradiciton that lies at the very heart of the band: Primal Scream present a sound so soft, yet as peope they are bitter and hard, though in love with what they are doing. As Bobby admits, the situation is the exact opposite of the Mary Chain, where the band's persona is wimpy but their sound bitingly hard.

Times' Up: Where Are The Young Men?

SO WHERE, then, are Primal Scream going?

"We need more money," comments Bobby, "and some fucker's got to give it to us!" When we recorded our single I was clock-watching all the time, and it reflects in the end product. it has to".

"What we want in the future is enough money to record properly. I don't mean six months in a recording studio recording one single like Tears for Fears or some other shits - that's disgustingly decadent! We just want enough time."


Warning. Some of the music here positively drips

"The tragedy in this country in the music business is that people don't realise that young groups, if they were given the chance to record properly and be promoted properly, would sell as manyy records as major groups".

"I care about about music and what really fucking annoys me is seeing so many people viewing music solely as a business venture. It cripples talent, and I'll give you one example that proves it. If the June Brides' single 'Every Conversation' was produced properly and put out on a major and plugged, it would be a number one, because that record is a classic pop song! It's a sin when a record like that sells only 700 copies. What sort of fucking state of affairs is it when talent like that is totally ignored?"

What more can I add?