Golden American Underground Record of my year thus far. Lawn Memory the second album by Minneapolis quartet Wild Firth is a treasure trove. Something I've been anticipating for the last couple of weeks since hearing it's pre-release tasters Eyes and Girl, listening through to the whole record on its release today was no disappointment, instead complete fulfilment of their rich promise.

So where are Wild Firth coming from? They owe some kind of debt to Deerhunter obviously, an influence they've been quite upfront about in interviews. This is most evidently traced back through singer Will Fraser's vocal stylings which are definitely reminiscent of Bradford Cox's.

But the band are no mere copyists. From the first notes of Stained Glass, the album opener, they veer off onto their own path and forge onwards into the undergrowth remorselessly over the course of the album. The result is some creation and some achievement and seems destined to become my cult American guitar favourite of 2019, just as Lawn's Blood on the Tracks, and Warehouse's super low captured my heart in recent years.

Neither of these records made a huge splash commercially or critically to my knowledge, nor are they the work of hugely garlanded bands, but Lawn and Warehouse both share something in common with Wild Firth. The spirit, zeal and invention of the early Eighties American Underground where R.E.M., Husker Du, Minutemen, Replacements and all kinds of other movers and shakers first burst forth to change the landscape of music once and forever.

Wild Firth rekindle this flame and hold it proudly aloft for the full duration of Lawn Memory. In doing so they even invoke the 'memory' of my favourite record of all, R.E.M's Murmur, the first thing I wrote about on here and the one I always return to as the album that shaped me most, recast me in fact, way back in 1983.

Lawn Memory has much of Murmur's shrouded enigma and arcadian wonder. There's much going on beneath the surface, murky depths which hold the promise that you'll want to return to the record again and again and again. Wild Firth add something of Peter Buck's thick guitar jangle to their mix to give their sound a stark, resonant mystery.

I got through my first playing of Lawn Memory in one sitting early this morning barely having noticed where the time had gone. This happens to you when you're listening to the best records. They draw you in and you surrender to them while they in turn keep giving back to you. There's not a false note here.

I'm not going to change my mind. Lawn Memory is a quite blisteringly brilliant album that I'll return to repeatedly over the coming months until I feel I understand its bones and sinew better and get a grasp on its dark heart. Perhaps I'll come back to this review and flesh it out more as I get to understand a little more of what makes it tick. I'm pretty sure I will. In the meantime, just listen to the record. Fresh on the mat like a morning paper at the beginning of a long deserved holiday. One for true believers! 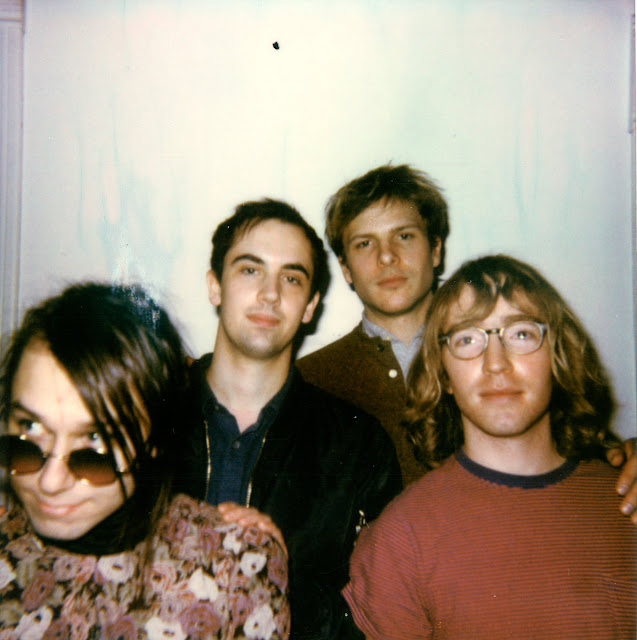 P.S. I think this only a digital and cassette release at the moment. It deserves to be on vinyl. I'll certainly get a copy as soon as it is.

* A further footnote to this. I posted my review to the band on their Facebook page. They thanked me and re-posted it. Much appreciated. I've been listening to the album again this morning and it only confirmed to me how great it is. Something really special going on here.
Posted by Brush Box at 12:00 AM