I very much like The Shins. They're melodic and quirky and original too somehow, though it's clear they fit quite neatly within a certain line of music. They're obviously the vehicle of lead singer James Mercer. He made the point himself by dismantling the original incarnation and reassembling with a new set of musicians but under the same name to show once and for all who was the auteur of this particular project.
They've done a lot of good to great tracks but surely regardless of what they do from now on they'll be chiefly remembered in association with the song that made their name first. New Slang from their first album Oh Inverted World. 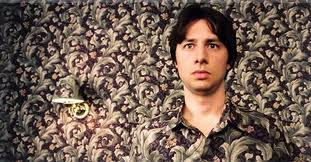 The song broke big largely because it was featured in Garden State, a turn of the century stab at a state of the generation movie written and directed by Zach Braff, starring Braff himself and Natalie Portman. It's a good film, made me laugh quite a bit, has a good feeling for colour and mood and set the marker for hip soundtracks taken up by Juno and other vaguely indie American films. It's also very precious and self-regarding but perhaps that's also quite appropriate given the pretty privileged set of people it's set around and made by.
New Slang is at the very heart of the film acting as the catalyst to set up the emotional relationship between Portman and Brach's characters which eventually becomes romantic.  She hands him a set of headphones and plays him the song telling him it will change his life. Of course it does.  It's an immediately affecting song for people with certain record collections. It has that feel of some of Simon and Garfunkel's great sixties records, a sense of gears, direction, lives, and perspectives changing within the course of the four minutes it ducks just under. 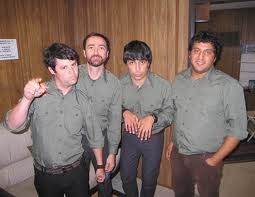 The Shins emerged from Albuquerque, New Mexico in 1996 at a strange turning point in American Alternative Music history. Husker Du, The Replacements, R.E.M., Sonic Youth, The Pixies and Nirvana had all made their big statements. Pavement's records probably more than others were painting the way ahead. Towards ghettoisation. An 'indie-world' best exemplified by the ATP festivals which started shortly afterwards and which The Shins became regular players at. A lot of these bands really didn't belong on Lollopalooza which attracted its fair share of redneck muscle-heads. Pavement themselves had been pelted with mud on more than one occasion. ATP partly served to seal out these kind of people. It's the politest music festival I've ever been to.
The Shins music was completely devoid of the fire and anger of the American Independent trailblazing bands of the eighties detailed in Michael Azerad's wonderful book Our Band Could Be Your Life . There was a kind of resigned, neutered contentment which suited the generation it was playing to. But there was unease flowing beneath its melodic skin.
Mercer was well aware of the lineage he was working in. During the video for the song the band recreate the sleeves of Husker Du's Zen Arcade and New Day Rising, The Replacements Let It Be, Slint's Spiderland, Cat Power's Moon Pix, Sonic Youth's Sister, Double Nickels on the Dime by The Minutemen and Squirrel Bait's first EP.
It's a pretty cheeky gesture because though clearly intended as tribute it also implicitly places The Shins as next in line. This is not lacking in confidence. However, the quality of the song means this hubris is not entirely misplaced. It also came out on Sub Pop after all. 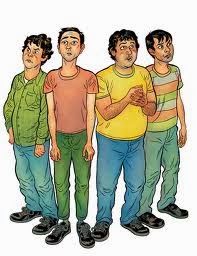 New Slang and Garden State made The Shins rich and famous. Wincing the Night Away, the next album completed after the film came out went to #2 in the Billboard chart. This is a remarkable achievement for a band making their kind of delicate, sensitive music. But at the same time they had to deal with the implicit accusation of selling out. New Slang after all featured in a McDonald's ad in addition to the Garden State soundtrack. Here's an excellent description of how things changed for Mercer and The Shins by someone who is clearly no fan of the film.
"Nobody has ever had Garden State and what it did to/for The Shins more on his mind than Mercer, who in interviews promoting Wincing The Night Away appeared to be alternately elated and terrified by the rapidly expanding audience the film had afforded him. He told The Stranger that while he was making the record he “felt there were now more people who might be as interested as I was in... expanding the territory I dwell in.” But he later confessed to the L.A. Times that he had trouble sleeping after Garden State—which is referenced explicitly in the record’s title, though wrapped in a jokey Sam Cooke reference—because he felt "my whole world was moving around.” Mercer’s discomfort was even more apparent on the record itself; Wincing was drenched in flopsweat, the product of a man who had spent too much time in the studio trying to create music that once seemed breezy and effortless. It was as if Mercer could no longer pretend that he was making music just for himself, and was obsessed with living up to the ridiculously lofty claims of an imaginary nitwit invented by the guy from Scrubs. Wincing The Night Away ended up sounding simultaneously over-thought and inconsequential, “a lovely and well-executed album and—for the first time in the band's career—nothing more,” in the words of Pitchfork’s Matt LeMay. (Probably not coincidentally, Wincing The Night Away was easily the worst-rated Shins album by the web’s pre-imminent music taste-maker, ranking far below Oh! Inverted World’s 8.0 and Chutes Too Narrow’s 8.9.)
But the strain put on Mercer and The Shins by Garden State can be measured by more than arbitrary record scores. By 2009 The Shins were a band in name only; Mercer had sacked drummer Jesse Sandoval and keyboardist (and unfairly accused America’s Next Top Model abuser) Marty Crandall and replaced them with hired guns. He was also collaborating with Danger Mouse on the just-released Broken Bells album and acting in movies with the foxy ex-guitar player from Sleater-Kinney. "I started to have production ideas that I wanted to do that basically required some other people," Mercer explained to Pitchfork. "It's mainly about that. It's an aesthetic decision. It's kind of hard to talk about stuff like that, isn't it? Because I don't want to bum anybody out. I'm on good terms with those guys, I hope to maintain that."

Several months later Sandoval granted a truly bizarre interview to the Portland Mercury where he 1) candidly dispelled the notion that Mercer was on good terms with his ex-bandmates and 2) promoted his awesome new food cart. While Sandoval took pains to point out that Mercer wasn’t “a malicious person,” he paradoxically discussed the gory details of his unceremonious firing, which apparently was done over e-mail and with a minimum amount of tact by his clearly uncomfortable friend/soon-to-be-ex boss. “When I think about this, probably if James really had complete say in it, he would have killed the Shins,” Sandoval told the Mercury’s Ezra Ace Careaff. “I definitely believe management's like, ‘You know, you can't start over, you built a name, people recognize you—why would you want to start all over?’ And so, the only thing he had left to do was to really make a drastic change, and I know working in Los Angeles with a bunch of studio people, he was able to find himself in a position where he didn't have to do 15 takes. Even himself, he could have someone play his parts, and that's a romantic idea. I don't blame him for that.

“It definitely got more complicated,” Sandoval said, reflecting on how fame impacted the band. “That's the hard thing. A complex web of relationships form when you start working with your closest friends. We are all terrible communicators with each other. It's hard when your boss is one of your best friends. I'm pretty sure it's even harder to be the boss of your best friends.”

Reading Sandoval’s interview, I actually feel more sympathy for Mercer, who had obviously reached a point in his life where he either had to move on with his career or be a good friend. It was an impossible decision, because either way Mercer was going to lose. Where he is headed now seems all too clear—he’ll continue to work with “better” musicians and write “better” songs, but he’ll never again make records as beloved as the first two Shins albums. He’s well on his way to becoming just another dude who wrote that song from that movie people used to like. That’s the downside of a song changing your life—everything that comes afterward is sort of an anticlimax."

This is all very sad if true. However, the song itself seems to be about breaking away. Mercer has said that it was written about wanting to get out from the relationship and the place he was in. It's a beautiful statement. As I said I very much like a lot of The Shins songs but this is the one I love. 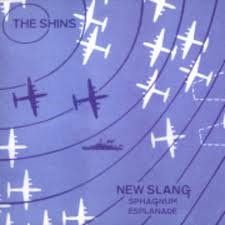