On my mind for a couple of reasons posted away. My favourite Cure album. Re-posting this.It's almost October again. Originally from 2014. 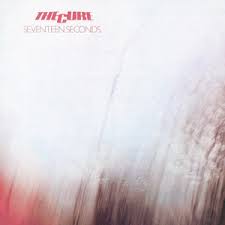 It's almost October. The weather's turning and the light's failing. At this point you start to feel the dampness gather all about you, whether you're at home or on the street the air around you telling you that Winter and darkness are closing in and you're going to have to brace yourself for the long weeks ahead. Five months before the Sun starts its recovery. All things considered, perhaps not the best time to listen to The Cure's 17 Seconds on repeat, in a darkened flat, on your own and try to write something worth saying about it. Particularly when you've got worries and concerns of your own.  It seems like the kind of masochism that human beings become prone to once they find themselves away from work. Yet, somehow, 17 Seconds is worth it. It's a particular record.
This is the best Cure album. This claim is not made from a position of authority or knowledge. I haven't heard an LP of theirs from beginning to end since Pornography was released. Since they became hairy spiders in pullovers that looked set to unravel if you gave a loose end a tug. And donned pancake mix make up and set forth to conquer The States in the late eighties.
So I'm no dyed in the wool fanatic., My interest stopped around 1985 when they decided they preferred  New Order to themselves, just before they chanced upon their own winning formula. It all became a bit Alice in Wonderland for the masses for me. I thought they were more honest and interesting here. This was the sound of the place where they came from. The London hinterlands. They surely soundtracked them better than anyone else, before or since. Smith wrote the songs in 1979 and 1980 in his parents' house in Crawley. The band then recorded the album in 7 days, apparently without demos over daily 16 hour studio sessions to minimise production costs on a tight budget. This, regardless of what anyone else might tell you was the sound of the suburbs.
The opening song is an instrumental. Always a brave move. Called Reflections, it's the sound of very little happening very atmospherically. It sets the tone for what's to come. It's aptly named. Much of the album sounds like it's observed from behind glass, by vaguely disaffected  teenagers who despite their mutterings will still come downstairs to table when called and eat supper when it's ready. Just another  rainy, overcast day in the suburbs, deep into Autumn.
17 Seconds sounds different depending on the time of the day you listen to it. In the afternoon it's all dripping taps and ticking clocks and rain on the window pane. Time refusing to pass. In the morning it's more sparky, the irony and skilled songwriting comes through more clearly. For me today, at the end of a long hard day at my desk, it didn't work. It seemed petulant when I needed something adult. It's an album of mood and frankly you have to be in the right one. Of course it helps if it's raining.
Play For Today is next and it shows how far The Cure have travelled and how many literary books and artistic films have been devoured. since Boys Don't Cry. Play For Today was a BBC programme of the 70s, one off  heightened melodramas of the kind Robert Smith, (always The Cure's mouthpiece and puppeteer), indulges in here. It's a display of petty, unpleasantness to make a statement of who he is. 'I take what I require...' the Punk refusal to be nice, drawing a line in the sand to demark them from the Hippies. No love out here in the suburbs.
Secrets may as well be another instrumental, as what lyrics there are Smith mutters deep in the mix. It all adds to the sense of this being a soundtrack without a film. In Your House keeps the pace up, though in this case it's quite consciously that of a metronome ticking on the shelf. Uncommunicative teenagers gather in gloomy rooms to pass time together. Slowly.
'I play at night in your house
I live another life
Pretending to swim
In your house
I change the time in your house
The hours I take
Go so slow ...'

And then Three, another instrumental to close off the side. If I'm making the record sound humdrum I'm not doing it justice because I think it's a minor masterpiece. It describes a certain outlook, perspective and response to existence perfectly. It's Harold's life before he meets Maud. Terry's before he met June. 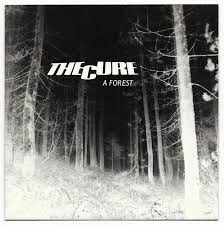 'The girl was never there. It's always the same. We're running towards nothing. Again and again and again and again and again and again and again...'
Flip the record and  after yet another brief instrumental  A Final Sound  which I never realised existed until just now, A Forest kicks the second side into gear. It's an absolute landmark moment for the band and somehow should jar in some way. A great song among very good ones. But it slots in perfectly here as it's cut from the same cloth as everything around it. Existential gloom. The vague sense that something awful might be about to happen but also the possibility that it equally well may not. That you just have to wait. Smith himself has been resistant when asked about the song's content. Having originally indicated that it was inspired by a childhood dream he later changed his tune and said it was a song about a forest. Personally I don't blame him. It stopped people asking the question. If it's an albatross for him it's one he wears lightly. A Forest has been played live by the band an estimated 800 times.
Listening to 17 Seconds at 48 when you first heard it at 16 is rather similar to looking back at Hamlet if you first read that at the same age. You understand the subject matter a lot more than you did at the time but are still struggling to work out what either are really talking about because you never really will. They're both deliberately, hanging question marks. Which is better?  Received wisdom tells us Hamlet and I'd probably agree, (I'm being ironic here but refuse to type a winking face),  but A Forest  focuses on similar themes. Quite consciously talking about what it feels like to be young but feel old, to be alive but unsure of whether we actually are, to wonder whether it's worth remaining so and ponder on the nature of unknowable. All the big themes kids! Listen to it. It really does all these things. It didn't make such a big splash just because it has a good tune. It reached Number 31 in the UK Singles Chart in 1980. It should have been Number 1.It made its mark nevertheless.
People are now writing PhDs about The Cure and getting taken perfectly seriously so I'd better stop here. I won't encroach on their territory. All I'll say is if you've ever had a dream and felt it was real and it's disturbed you by what it intimates about yourself and life, go listen to A Forest. It describes the uncanny as well as any song I know.
From A Forest to M, another quite masterful and beautiful, strummed gloom-fest pop song. 'You'll fall in love with somebody else again tonight...' Smith is very good at conveying the powerless of us all within the scheme of things and the way we all go along with life's dictates. He's read his Modernists.

'Take a step
You move in time
But it's always back ...
The reasons are clear
Your face is drawn
And ready for the next attack.'

'At night.  I hear the darkness breathe. I sense the quiet despair
Listen to the silence . At night'
The album's winding down. At Night which follows is almost generic, so well have the band established their sound by now. It points forward to the more portentous sound of Faith an album which is played out almost in darkness while 17 Seconds is all fading light and all the better for it. It's probably the weakest of the fully developed songs on the record but frankly the standard is not dropping much.
'Time slips away. And the light fades away. And everything is quiet now.'
And so to the final track 17 Seconds itself . In many ways its three minutes  encapsulates the record itself. A completely clean, assured and identifiable sound, quite distinguished by now from the early influences Wire, Magazine, Buzzcocks, Banshees and the like. They've made suburbia their own. Light fades away on the quiet tree lined avenues and there they are, behind glass, watching the shadows gather, musing on whether any of all this really matters.
As I said earlier, a minor masterpiece. Having had it on repeat play for the last few days I'm happy to stack it midway back on one of my racks for a while and let it sink back into its gloom But it's a record with very much its own statement and mood and I'll come back to it.
From here the band descended into depression and then full on, certifiable mania with Faith and Pornography  Others prefer these. I'd plump for this instead. Partly for nostalgic reasons and partly because I think it stands up better now. A constant reminder for me of when I was seventeen, sitting in my attic room in my parents house, listening to my gradually growing record collection, making my way through Penguin classics, thinking about girls and trying to make head or tail of where I was going and what it was all about. Like countless others. Still not quite there yet.
'Seventeen seconds, a measure of life.'
Posted by Brush Box at 1:25 AM